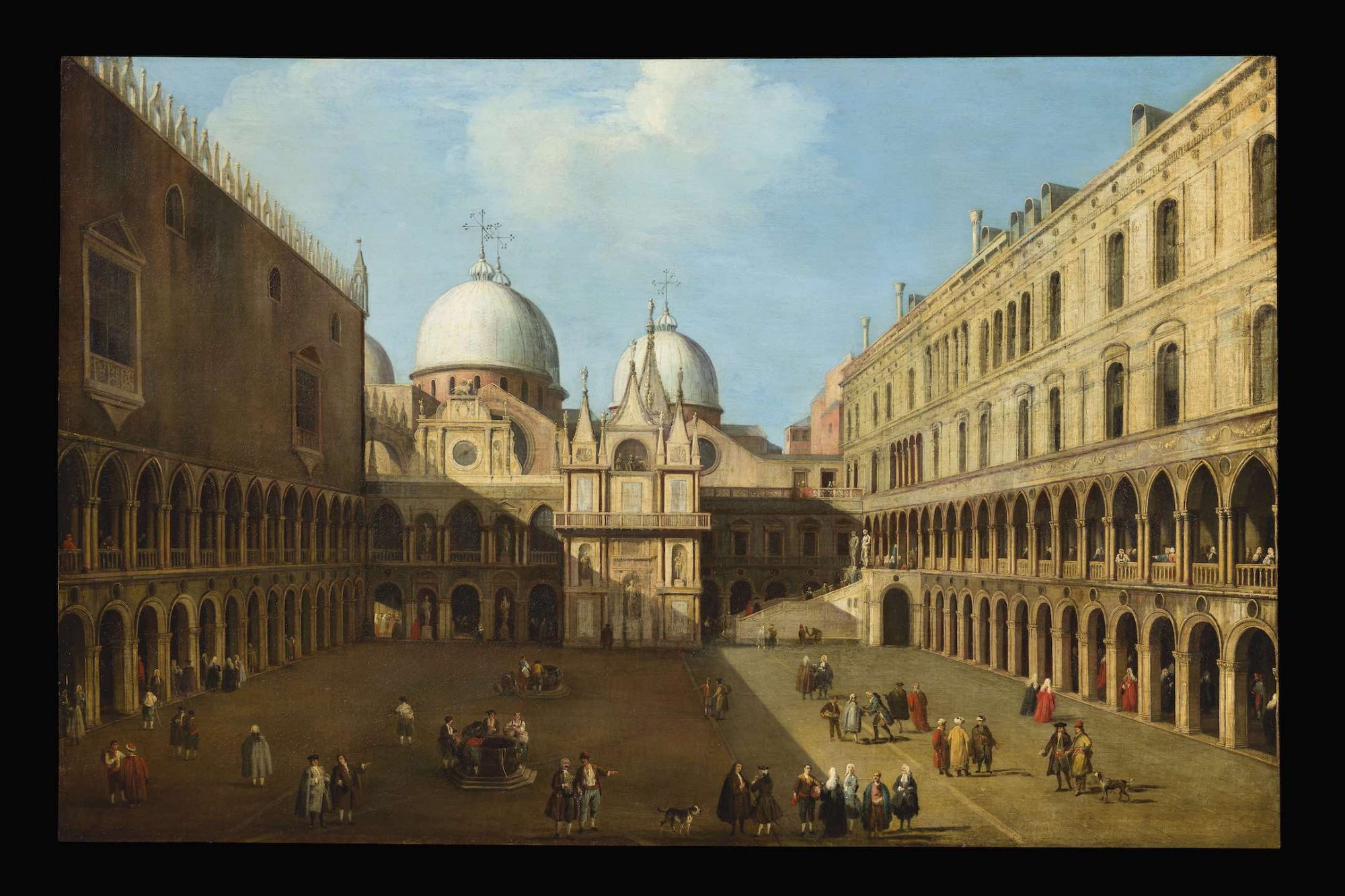 If the Lake Garda artist has always attracted our attention because of his contacts with the legendary Canaletto, it must be noted that this view depends instead on the engraving by Michele Marieschi contained in the Magnificentiores selectioresque urbis venetiarum prospectus collection. The publication dating back to 1741 allows us to run further in time for the execution of the well-architected canvas, which also had a famous identical description – although more crowded – in the specimen at the National Gallery of Art in Washington attributed to the collaboration of Antonio from Modena. Joli with Gaspare Diziani from Belluno, author of the stickers.

Cimaroli had the full support of Marieschi who, as a good specialist in painted architecture, did not hesitate to make use of a significant group of macchiettisti, or those masters expert in the figure, among which the most constant, Diziani, Simonini, Guardi stood out. Yes, because Cimaroli did not take long to open up to collaborations, since 1726, which is the date on which he is registered with the Fraglia, what we could define as a syndicate of painters in the Lagoon.

The so-called Tombeaux des princes series dates back to the same years, the large vertical format canvases that the impresario Owen McSwiny requested from Bolognese and Venetian masters on behalf of the English Lord March with the intention of deploying them in his Goodwood home . They represented allegorical tombs of illustrious characters from the English history of the recent past, in an imaginative synthesis that for each individual subject involved specialists in the figure, in architecture and, of course, in the landscape: Domenico Valeriani was identified to remain in this specific area , Nunzio Ferrajoli and Giovanni Battista Cimaroli himself; artists able to best interpret the singular celebratory component with that variety of elements and the readiness of the invention peculiar to the taste of the “whim”: that is that theme able to disguise itself as an enigmatic face because of the free expression that is Mountain.

Venice was the turning point in the life of Cimaroli who, of course, if he had remained in the orbit of the master Antonio Aureggio, would not have gone too far (U. Ruggeri, New works by Giovan Battista Cimaroli and his teacher Antonio Aureggio, in “Art document”, 13,1999, pp. 270-277).

On the other hand, in the complicated commercial mechanisms of vedutismo and landscape in Venice he collects his success, he does not reserve himself in bearing the constraints born from the market, he yields to the requests and opportunities of the sellers.
Let us reflect on what had happened in the collection of Venetian views by the English aristocrat Henry Howard; forty paintings believed to be by Canaletto and purchased directly in Venice between the fourth and fifth decade of the eighteenth century for the sumptuous residence in Yorkshire. In reality the Canalettos were only five; the others were paintings by Bellotto, Marieschi and, in fact, Cimaroli.

A great lord of painted nature, who brings the legend of Arcadia into the living rooms, generous in mixing with the experts of perspective, Cimaroli began to interest scholars well informed on international collecting, as were Watson (GB Cimaroli, collaborator with Canaletto, in “The Burlington Magazine”, 95, 1953, pp. 205-207) and Morassi (Essay on Giambattista Cimaroli collaborator of Canaletto, in “Arte Veneta”, 26,1972, pp. 167-176).

Fortunately, today Federica Spadotto (A forgotten artist: Giovan Battista Cimaroli, in “Essays and memories of art history”, 23, 1999 (2000), pp. 129-187; Giovan Battista Cimaroli, Rovigo 2011) is trying to sum up the artist’s rich repertoire who, although not well documented in public museums, has the advantage of being easily recognizable with his clear and diligent style. Which here stands out in the convenience of a memory image of Venice, of love for the city, in the corners of a memorable place as well as in the free spaces in which the air that the specialists of this singular painter will breathe circulates.